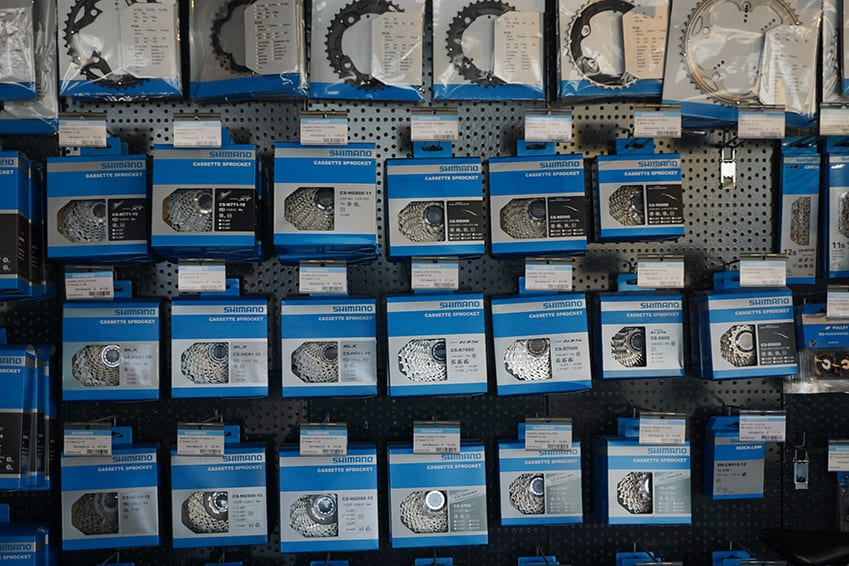 With the availability of different chainring setups such as the 1X and 2X, you’re able to become more efficient in distance and stoke depending on the circumstances.

The 1X drivetrain has been getting a lot of attention because of its simplicity of having fewer parts, but with a wider range. It’s become quite the norm among mid and high-end MTBs, and even entry-level models as well. So should you get a 1x or 2x drivetrain?

This 1X system reduces weight, not to mention cost and aerodynamic drag. And you know that everyone puts a premium on anything that is lightweight, especially for mountain bikes. But, don’t be too quick to dismiss the traditional 2X just yet. There is more to the argument than meets the eye.

Even though I scratched my head a little when they first came on the market, it’s easy to appreciate the single chainring for all intents and purposes. It wasn’t even that long ago when 3X was the standard but I can see why we’re going in this direction.

It has fewer gears, one in front and eleven at the back. This simplicity makes for less gear manipulation that allows you to focus more with your ride. You have room for a lever on a dropper post on the handlebar because most of your gears are located at the rear derailleur. Less is more!

keep in mind that the 1X drivetrain is not for everyone in any place. The setup will work best when you use your mountain bike on flatter surfaces such as going downhill. You won’t need a larger gear range plus, no dropping chains to worry about that can otherwise hamper your ride.

One of the main features of 1X groupsets that secures the chains is the varying tooth widths that correspond to both outer and inner chain links. As such, it does not require a derailleur on the front side, making it less complicated and lighter at the same time.

A non-technical individual will appreciate the regular operation, but there have been instances when cyclists would engage their gears more because of the simpler structure. You don’t have to deal with multiple chainrings, allowing you to make the most of what you have.

On the other hand, the single chainring is at a disadvantage of having a smaller gear range that will make going uphill more difficult. The big jumps on the gear ratio is also an issue, so finding the right one can be quite a challenge.

Many agree that 2X drivetrain is best for mountain bikes when climbing. The front derailleur offers gear variety and seamless transitioning, which makes mountain ascents and unfamiliar terrain more manageable.

The double chainring system, however, may be ideal for the technical rider who can have a better understanding on the aspect. Along with the extra gear lever, the front derailleur adds weight to the bike. Furthermore, the incidence of chains falling off is pretty high.

Essentially, the 2X drivetrain is well-suited for more “challenging” terrains where cadence is a factor. Most riders operate within the range of 80 to 100 rpm. But when a racer has to slow down, the gears must be capable to adjust to lower RPMs repeatedly. As such, you can hit the sweet spot with the appropriate gear using a 2X drivetrain.

When it comes to drivetrain manufacturers, there are two labels that stand out, which are Shimano and SRAM. You will find them in branded bikes today, dominating the lucrative market of premium cycling components.

Japanese Shimano was founded almost a hundred years ago but started manufacturing groupsets in the early 80s. SRAM, which is a US company based in Chicago, came out in the latter part of the decade. SRAM first released the Gripshift and ESP derailleurs. It has since acquired other brands like RockShox, Zipp, among others.

However, Shimano has a bigger market share at 50 percent globally. The company offers multiple drivetrain options while SRAM is focused on 1X systems, although they also have few 2X types.

SRAM boasts of being the only brand that manufactures a groupset specific for gravel bikes. It has both a clutch-style derailleur on the rear and alternating teeth setup on the chainring. These features prevent displacement of chains on harsh trails.

SRAM’s groupset offers a wider gear range of 10-42t on its cassette. And with the 40t chainring, you can reach a speed of 50kph and anything lower. It must be noted, however, that the 1X system is not the most ideal. The gaps between sprockets tend to be bigger. However, with electronic shifting addressing the problem of front shifting, this design proves to be unnecessary.

Meanwhile, SRAM has proven that 1X groupset is no longer limiting your optimal experience to downhill rides. With their XX1, it can cater to different applications such as trail, cross-country, and mountain bikes.

Shimano has yet to create a groupset for gravel bikes. However, they can accommodate larger cassettes that most gravel bikes have at 11-34t. As mentioned earlier, a 2X setup works great for flat surfaces. It allows you to pick the most appropriate gear with the packed sprocket spaces.

Remember though that default stock Shimano drivetrains will not be too accurate in achieving a low gear. Making some adjustments such as turning to a 50/34t chainset with an 11-32t cassette will provide you with a minimum gear of 28.46 inches. But in reality, this is not enough to facilitate your bike’s ascent compared to the lowest gear of 25.51 inches of an SRAM 1X.

The 1:1 ratio is another difference between Shimano and SRAM. This makes for improved shifting in order to achieve a sturdier ride. SRAM’s 2:1 ratio, on the other hand, will enable effortless shifting using your thumb. With Shimano, you have to use your forefinger as well.

Advantages of Shimano over SRAM

Shifting of two gears: Shimano groupsets are equipped to shift 2 gears up each time in contrast to SRAM’s single gear. However, multiple gears are possible on both when riding downhill.

Easy derailleur cable maintenance: Shimano allows you to make changes on the cables given its no-fuss housing setup.

Advantages of SRAM over Shimano

Rear-wheel dismount: SRAM has a locking mechanism on the bike’s rear derailleur. As such, there is no tension on the chain which will facilitate dismounting of the rear wheel.

Clicking sound: What’s great with SRAM’s shifting setup is it produces a reassuring click sound that is loud enough to indicate a gear transition.

The future is looking bright and technology is pushed forward every day. Wireless drivetrains are on their way and perhaps this will become the new standard. Many manufacturers are working on new tech so here are a couple of interesting developments.

You can customize Shimano’s 2X drivetrain in order to improve the gear spacing when riding gravel bikes. You can swap it for a subcompact chainset that will allow you to go lower with your gearing.

You have the option to combine at 26/30t with a cassette of 11-34t so that you can acquire a low gear at 23.63 inches while maintaining the maximum 112.32 inches for speeds of 50kph. This will assist you in steep ascents.

There are three options, namely: a 1X11 using electronic derailleur operation, a 2X11 with separate controls on both derailleurs in front and on the rear, and a combination of the 1X and 2X setup. The latter is made possible by automating the front derailleur adjustment.

There’s also Deore XT which you can merge with a Shimano Di2 shifter. It will enable a 2X groupset to have lower gears for off-road surfaces. Similarly, you can emulate the build of Specialized S-Works Diverge to achieve the shifting mechanism of a 1X drivetrain.

This wireless electronic shifting technology is revolutionizing the way bike gears can be manipulated. The rear derailleur uses a motor to move itself instead of cables, among other innovations. How cool is that?

So, should you join the 1X bandwagon, or stick to the 2X ‘original’? If you are a rider who prefers flatter surfaces, you can maximize the simplified technology of the 1X groupset. But that is not to say it is the best option. The double, even triple chainrings have their own benefit that the right rider can take advantage of.

Bottomline is, choose according to the type of trails you will likely shred often in order to get the smoothest and the most efficient ride. Why not both? Well you know, money and all that.