What’s the difference between a mountain bike and a road bike? The main difference is speed and endurance. A road bike is meant for riding longer distances at higher speeds,  MTB’s are meant to ride off-road and are less suitable for long distances. Both have different types of gear and parts designed for different purposes.

Road bikes and mountain bikes both can be divided into different types of bikes. Want to travel long distances and maintain speed, go for a road bike. If you’re of a thrill seeker and like to get dirty, go for a mountain bike. To be fair, it’s not that simplistic. I decided to take a deep dive into the differences and I found out there are lots of differences. 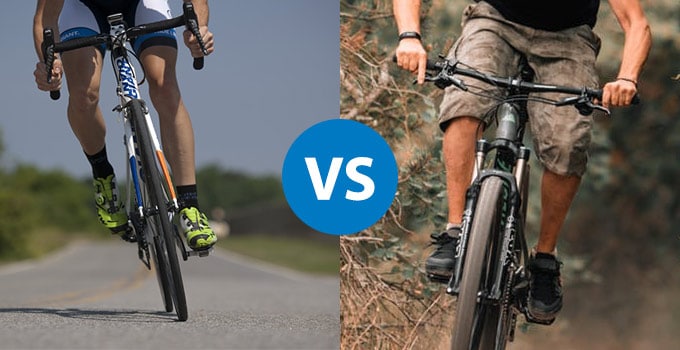 Mountain bikes are designed for off-road use (trails, tracks, dirt, snow) and don’t perform well on streets and pavements. You can, however, swap the tires and use a more slick profile to get more performance on the streets. Road bikes are built for speed and long distances, you’ll have a hard time keeping up with a road bike on a mountain bike.

Road bikes are faster and perform better on asphalt and pavements. A road bike doesn’t handle rough terrain very well and will suffer more wear and tear if you take them out on a trail. It’s a rather unpleasant and shaky experience due to the lack of suspension.

Road bikes are lightweight and (depending on the type) designed for speed. Posture is a lot different on a road bike, riders sit in a forward-leaning position to improve aerodynamics. This also allows transferring more power to the paddles.

There’s also a difference in weight, depending on the bike road bikes are often lighter compared to maintain bikes. I’m not talking high-end carbon mountain bikes, of course, these bikes are often very light-weight but still, a road bike weighs much less.

The main difference comes down to different gearing and bike parts. Mountain bikes have suspension to absorb shocks on bumpy terrain. The tires are wider and have knobby profiles that increase their grip on rocks and dirt. Road bikes often have a slick profile making them faster, both have completely different purposes. If you want something that’s suitable for on an off-road I suggest looking at a cross country bike.

The rear cassette is usually a bit smaller on road bikes compared to maintain bikes. The only exceptions are touring road bikes. Road bike cassettes have more individual gears, the hub splinging is deeper to deal with greater forces. Mountain bike cassettes have multiple gear groups on the carrier to distribute the forces more evenly. Manufacturers also save weight by shortening the splines.

Modern mountain bikes usually only have 2 chainrings where road bikes often have 3. This also means you can’t swap the crankset around, a MTB crankset won’t fit on a road bike and vice versa. I wouldn’t even try it because it definitely will cause mounting issues. Because a road bike has more chainrings they can shift into a heavier gear allowing for more speed.

Mountain bike forks are stronger and beefier as they need to deal with a lot of forces and stay in one piece. Most mountain bikes have suspension to absorb shocks. Often road bikes lack this feature though there are road bikes available which also offer suspension.

I’m not talking about pedals that come in stock. there’s a big difference between MTB paddles and road bike pedals. It’s not uncommon for road cyclists to use mountain bike pedals but there are differences. Both have a mechanism that locks your shoes on the paddle. The difference is in the size of the cleat that’s attached to the shoe sole. Mountain bike pedals have rather small cleats which make it easier to unlock.

This makes sense as you’re more likely to fall off a mountain bike when riding trails, it would be a much more painful experience if you’re unable to unlock. Road bikes have larger cleats increasing the contact surface between the shoe sole and the pedals.

Mountain bikes also have flat pedals (just like road bikes), it depends on your preferences.

Road bike brakes have a shorter pull compared to mountain bikes. Road bikes typically have mechanical disc-, caliper- of cantilever brakes where mountain bikes often have V-brakes or mechanical disc brakes. Hitting the brakes is more common when mountain biking but you don’t want to come to a dead stop too quickly. Often it’s a matter of adjusting speed when you’re about to hit an obstacle and accelerating again.

It’s hard to make such a broad comparison because there are many types of road and mountain bikes. Each type of bike is designed for different circumstances and styles and even then still have subtle variations. Some bikes focus on speed, touring, comfort or are designed for gnarly shredding. I’ll refrain from mentioning all types of road and mountain bikes but here’s the gist of it.

Race bikes are lightweight bikes and fully stripped down to make them as light as possible. Their design is aerodynamic and focuses on speed rather than comfort. The frames are stiffer and the wheels are thinner. Not really great for touring and steep terrain.

Gravel bikes are capable of riding both off-road terrain and trails while keeping the ability to maintain speed at longer rides. Their frames are stronger and can deal with rough terrain while the fork features a larger clearance allowing for wider and knobblier tires.

Endurance bikes are meant for long distances and endurance. This is the type of bike you see in mass cycling contests and the geometry offers more comfort.

Touring bikes offer comfort when you want to travel long distances and offer a comfortable ride. Not suited for speed or racing and build to last.

Cross Country (XC) is the most common MTB and is great for riding trails for longer periods of time.

Trail mountain bikes are great for gnarly riders that ride trails and tracks. They come in single and full suspension where the former is a lot cheaper.

Downhill mountain bikes are made for rough terrain, specifically downhill and speed. They’re not made for climbing but are meant to go down (obviously) while facing rough tracks and challenging obstacles.

Is a road bike faster than a mountain bike? Road bikes are designed for speed and long-distance travel. They are faster on pavement and asphalt but can’t keep up with a mountain bike when going off-road.