You have stuff you want to bring with you when you go out bikepacking. Where do you put your stuff? Do you immediately send them to the pannier? Let’s take a long, not-biased-at-all look at the options you have among bags that hang onto your bike.

You can put panniers on a mountain bike if your frame has eyelets to attach a rack. If your bike doesn’t have eyelets there are many options to work around like installing a rack on your seat stay.

Bikers who carry things with panniers, myself included, are on the side of obsessive about it. There are just so many benefits to them over backpacks and shoulder bags: no sweat on your back, comfortable, waterproof, large capacity—did we already say no sweat on your back? 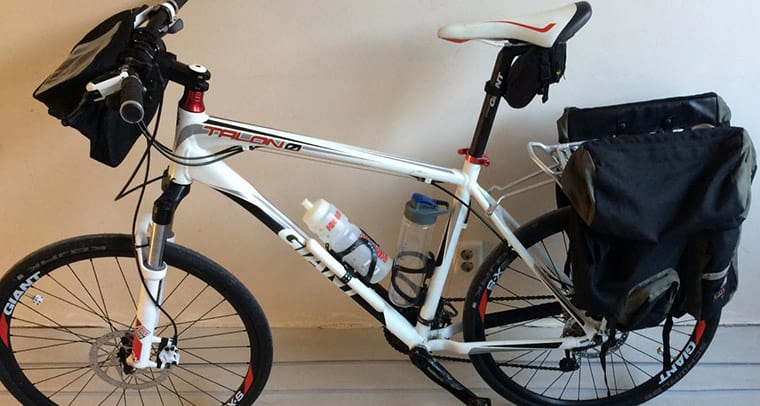 I mean, sure, I’ll use a courier bag or a backpack if I just want to pop in town for a night. But if my load is more than just a few light items, then I choose panniers without fail.

I admit two other benefits I see to them will show my age. Panniers only go on bikes, so a) neither of my kids are likely to ask to borrow them, and b) I won’t forget where to find them (that is, my bike).

If it isn’t too late, I’ll try to avoid preaching too much. In this article, I only want to share more about panniers and traditional racks. If you’re interested in learning more about the new set of bags for ‘bikepacking,’ see: Our top 12 bags for bikepacking—carry-ons for your lightweight adventures.

Racks are typically made from aluminium or steel tubing or rod. The cheapest and most rubbish are steel rod. They’re bendy, rattly, and flimsy. A step up would be an aluminium rod, inexpensive and light. They start at 10 USD, and when well designed are stiff enough to handle moderate loads.

The real fighters, though, are aluminium and steel tubing. The former starts at 25 USD and the latter at 60USD.

The power combination of lightness and strength, however, goes to the German rack brand Rubus. They offer Logo Titan, a titanium rack for the rear, for around 225 bucks. You can also find cheaper ones online.

Just as key as material is rack triangulation. This helps with lateral fortitude. Upon rear viewing, a rack that appears rectangular is more likely to bend than one with inward-sloping struts. Additionally, the larger the diameter of the tubing, the stiffer it gets, although there are real-world limits. Tubing can’t be too wide because they still need to carry panniers, whose hooks are only around a centimetre wide.

Racks could have features aside from pannier holding. A few can mount rear lights, which come in handy when you stack things atop the rack then wind up blocking a seat post light.

What if eyelets aren’t on my bike?

Ideally, your bike frame has eyelets for your pannier racks to bolt onto. Seeing as adventure/gravel bikes and softer cyclocross bikes are on the rise, an increasing number of bikes have eyelets on them. You can find them in the dropouts.

But many bikes still don’t. Luckily, you can still sneak your way into putting a rack upon your bike even without eyelets. Manufacturers provide a different set of options for those whose bikes don’t have eyelets.

One option is Pack n Pedal by Thule. It’s a rack that goes onto seatstays and fits into nearly any bike with some space there to spare. In fact, to answer the eternal question: Can you put panniers on a mountain bike? Yes, you can, with Pack n Pedal. They’re made to go with Thule’s panniers. They’re panniers that have a hook attachment. They’re held against Pack n Pedals by magnets, but note that the magnets add to their weight. Thule also sells side frames for these racks that lets you use any pannier.

Other manufacturers like Old Man Mountain and Tubus also produce racks that fit onto eyelet-less bikes. They come with kits that attach other racks onto these bikes.

Another possible scenario is that your bike’s eyelets are on the mudguard but not upon the seatstays. In that case, an elegant solution would be to instead use a seat clamp that has threads for racks (external link).

Though you could also just find racks that go over the seatpost, use them only for light loads. They may swing.

Bikers typically choose the back wheel for big panniers, though I don’t know why. Maybe cyclists were mimicking how horses carry loads at the back, too.

For the rear placement to work in your favor, you’ll need to have a bike with long chainstays. This way, your panniers can comfortably fit over the back wheel while still leaving room for your heels. Bikes for road racing won’t fit this ideal because the panniers will wobble, but touring bikes will work well. In fact, rear racks often come with these bikes.

If a rear pannier isn’t enough to carry everything, then you might want to place one by the fork, too. You can purchase racks that place the panniers low by the hub of the wheel, or as high as the rear racks.

You’ll want a tall front rack if you plan on placing light things on it too. For example, it’s a great spot for sleeping mats. Usually, highly placed front panniers are not as large as rear panniers.

If you fancy a bit of history, during the 70s Jim Gentes (Giro founder) and Jim Blackburn (Blackburn Design founder) experimented with bike luggage placements. Their results showed that the optimal load spread was achieved when using a typical rear rack and a low-lying front rack.

See, at the time, handlebar loads were on the up and up among cycling tourists. Gentes and Blackburn announced that these should only carry light loads. Otherwise, the loads will affect bike handling.

Taking it a step further was Nick Sanders. In 1984, he set a Guinness-official record for cycling around the world. He did this with two 45-L panniers placed on a rack placed below. I tried this as well and they did just fine as I toured and shopped for a handful of days.

There’s one pannier for every sort of folk and need. You’ve got convertibles that switch to rucksacks; office panniers that’ll hold a laptop or A4 documents; shopping panniers for ease of carrying off of the bike; huge ones that’ll carry anything but the oven; small ones for front rack and commuting use; and much more.

In the face of all this variety, it’s good to take a deep breath and think of what you’ll need them for. If you want an all-purpose, all-around bag for touring, work, and shopping, then pick the large rear ones. You might only need a single pannier for a trip to the office, but trust me, there are occasions you’ll be happy you have two.

If you have more specific needs, then have a gander at special-made panniers. For example, a briefcase one is brilliant when carrying A4 files or a laptop without bending anything. They’ll be safer in that than a general-use one, unless you aren’t particular about having unbent file corners.

If you plan on bringing the bag with you for more than a few metres, choose convertible ones with straps. They don’t work as spectacularly as rucksacks—you won’t want to hike for a day with it—but they do a fine job as you walk around town.

Pannier waterproofing varies. Typically, you won’t need to line your panniers with durable plastic bags, but there’s still some range.

The most waterproofed panniers you’ll find will definitely come from Ortleib. Hartmut Ortlieb’s story was that he was driven to create a watertight design after getting caught in the rain during his tour in southern England, 1981. He used truck tarpaulin first, then later added roll-top flaps and welded seams.

Other pannier manufacturers stepped up their game due to Ortlieb’s innovation. Even Carradice, Britain’s most traditional pannier maker, adds PVC and other kinds of panniers to its shelves. One of which is its Super C classic pannier line, which uses cotton duck as its fabric. It’s waterproof, but it needs a little care and attention to maintain.

Anyone who has ever lived through their bag bouncing down a steep lane after it was thrown off their rack will know solid attachments are blessings. Panniers in this day and age are firmly attached to their racks by closed locks to prevent just this situation.

Pannier manufacturers often get their attachments third party. One example is the German fixture manufacturer Rixen & Kaul. Its Klickfix series began with a mount for handlebar bags, but it has evolved to produce attachments of all kinds. R & K also has a wide selection of their own bags.

Ortlieb is another manufacturer that makes attachments that mount on racks. Their QL generation of mounts have grab handles whose hooks you can open one-handed. QL 1, 2, and 2.1 fit all racks, while QL 3 requires a custom-made mount. However, it’s able to sit bags low along racks for better stability due to a lowered gravity centre.