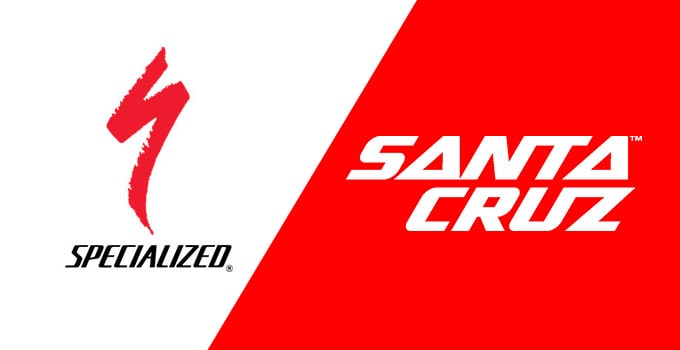 When comparing two bike brands it’s always difficult to find out what exactly makes them different. It’s a tough one, Specialized or Santa Cruz? It’s not that one is better than the other but there are differences which can be a decisive factor in choosing a bike. Here are the main differences:

That’s the answer in short, but there’s much more. In some cases, it’s not even about what bike fits the best or which offers the best bang for the buck. Some people want something different, not a bike that you see every day.

Santa Cruz is a less known bike brand founded in 1997 by Rob Roskopp. It’s a big name in the skateboarding industry but at some point, he decided it was time to move into bikes. So if you’re wondering, yes it’s from the same company.

Riskopp already had a lot of credit from the skate subculture. When he moved into biking the same crowd helped him to get credit. It’s more appealing to get a bike from a small company who understands the culture. Much more than a bike from a large corporation. They still have this image to this day and offer really awesome bikes.

Specialized (or Specialized Bicycle Components, Inc.) is a huge company that design and build bikes for almost any type of cycling sport. they originally started with producing bike components and introduced their first bike in 1981.

Specialized is based in the United States and was founded in 1974 by Mike Sinyard. Since 2001 almost half (49%) of the company is owned by Merida. They are also known for sponsoring riders competing in the North American and European professional cycling circuits.

It would be much easier to compare the brands if they had about the same line-up. Unfortunately, this is not the case. Santa Cruz only offers Mountain bikes and a few gravel bikes. Specialized covers the entire biking spectrum. Kids bikes, road bikes, MTBs, BMX, E-bikes, etc. they have it all.

You could say that Specialized has a lot more variety in their line-up. You will always find a bike with that perfect fit. They are praised for their customer service, if something breaks, they’ll replace it.

Some like Santa Cruz for their aggressive geometry. Their unique Virtual Pivot Point (VPP) Suspension Design deals better with small bumps. They offer both -upper and lower link suspension. The lower-link helps to deal with difficult and technical terrain. It’s also neatly recessed and protected.

Specialized has their own traits like Brain Technology and FSR. Brain Technology is an inertia-valve that knows when you’re pedaling hard or when the trail is hammering you. It reacts to roots, rocks and other objects that cause your bike to bump. The biggest benefit is a comfier ride and more speeds, even when you’re standing on your pedals.

FSR can both handle big shocks and small bumps from trail-induced forces. Because of the positioning of pivots, linkages and the real axle, there is less strain on the body when your local trail is giving you a hard time.

This suspension has four linkages and the drivetrain exists independent of the suspension. All this together means FSR helps you to pedal more efficient by transferring pedal power forward.

It used to be that Santa Cruz bikes started at $3,500 but this changed a bit over the years. The (hardtail MTB) Jackal, for example, is only $799. Let’s see how much you need to pay for a mountain bike at both companies.

When browsing through both of their websites, it becomes clear that Santa Cruz focus is on high-end mountain bikes. They offer many bikes between $2,700 and $3,500 and only one entry-level MTB. Higher up there’s a limited selection of bikes around $5000.

Specialized has a wider range to choose from, so you’re more likely to find a bike that fits. More than enough entry-level bikes that can hit trails and a couple of cheaper hardtails you should probably just use for the road.

There are many bike brands and a few like Giant, Trek, and Cube (Europe)  dominate the market. They offer high-quality bikes in about every category. They also offer cheap bikes which aren’t to write home about. Imagine riding a $6,000 Trek bike and your colleague with his $600 bike says. ‘Hey cool, we have the same bike!’. To some people, this is a problem and a reason to look for something more exotic.

Some people want something more exclusive. They buy bikes from brands you never heard about. These exotic brands have to work with much smaller budgets and they charge a premium. They offer limited bikes you won’t see anywhere in bikes stores and are often custom made.

Specialized is a huge company and not very exclusive. Santa Cruz is still a much smaller company but is more in between a tiny bike company and a large one. This means you still get a somewhat exclusive bike.

Both brands have a loyal following but Santa Cruz is a bit more cult-like. Santa Cruz is a famous skate brand and they are very much related. When Rob decided to go into bikes, this gave them a lot of street credit. He was able to build a successful skateboarding company, so why not a successful bike company?

During my research, whiles digging through several mountain bike forums I noticed some people hold a bit of a grudge against Specialized. This has something to do with them suing smaller companies and taking them down for all kinds of infringements. Wikipedia has the details if you’re curious. I don’t know much about this subject to form an opinion, so I’ll leave it at that.

Which One Should You Buy?

The old cliche, you buy the bike that fits best. It’s a personal preference and both brands have great bikes and their own following. Santa Cruz has a limited line-up but gorgeous bikes with a focus on high-end mountain bikes. If you want something that you don’t see every day Santa Cruz is a great option.

I bet if you come across a fellow rider with a Santa Cruz you have a lot to talk about. Santa Cruz offers more high-end exclusive mountain bikes around the same price range.

Go for a Specialized when you have a limited budget and can’t come up with more than $600 bucks. Even though they have a lot of expensive bikes they also offer bikes in the lower end. This really is the biggest difference between the brands.

To be honest, you shouldn’t be looking at Specialized with a limited budget. You can get a lot more bike for the same price from other brands but a decent bike will cost you at least $800 to $1,500.

Both brands offer amazing bikes and there isn’t a huge difference. Sure, geometry might be a bit different but in the end, the best bike is that one that perfectly fits your body type.