Mountain biking has become more popular recently and is making a comeback. They ain’t cheap though. In fact, nowadays, a piece of this geared machinery can cost you a chunk of change. A 10 thousand-dollar hardtail may sound crazy – why that costs way more than a motorbike is mind-boggling, a good second-hand car even. But hey, welcome to the 21st century.

And just when you think it’s the meanest set of 2 wheels you’ve heard about, outcomes something way better, bigger, and more expensive. So one might wonder, how did mountain bikes become so expensive?

Mountain bikes are expensive because of the use of high-quality components and technology, some MTB’s go up to $13,000. In order to keep your ride safe, you’ll need proper bike parts that are durable and can take a beating. Cheap mountain bikes are outright dangerous on trails, frames, wheel, and handlebars can break especially if you ride trails. 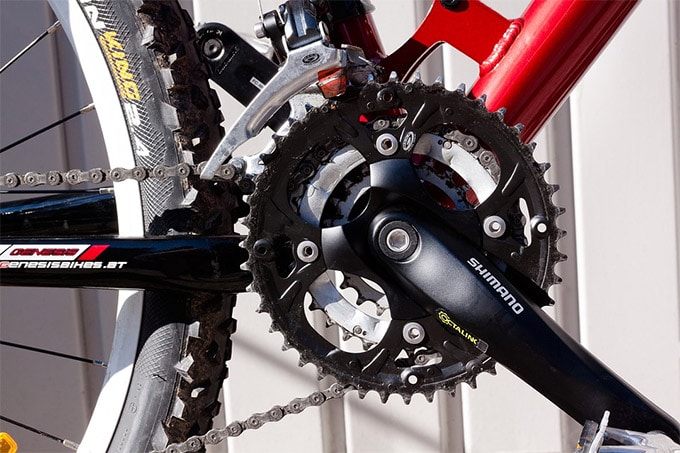 The Price of MTB Components

While MTBs can cost you a pretty penny, not every one of them is in the 5-digit range. You can get mountain bikes for under 800 dollars or much lower. But generally speaking, the cheaper priced mountain bikes are less reliable and consist of lower quality components.

It is called a mountain bike for a reason: designed for use on the mountain, with all its inclined slopes, ledges, rock and tumble. And you get to do this fast given its responsive performance. The abuse it’ll take will entail premium components or else you’ll find yourself buying a new one every now and then. Now you don’t need an all carbon mountain bike. An aluminum hardtail is fine for the casual biker and they start around $800.

The more advanced the components are, the more expensive it gets. Pros and hardcore MTB’rs do anything to get the strongest and lightest components but you guessed it, it comes at a price.

Getting a Good Frame

This part is usually the most expensive and by itself, one that’s made of carbon fiber can be priced at around three thousand dollars. Known as an aerospace material, carbon fiber is also ideal for small scale use such as metal tubes on a bike. Carbon is less environmentally friendly though.

It must be noted, however, that carbon fiber isn’t your only option when you look for a frame. Aluminum is still the way to go for most mountain bikers and much cheaper. Carbon-fiber composite frames come at a premium price. Its stiffness should be attributed to the epoxy resin, which is a gooey material where the carbon fiber is suspended. On its own, carbon fiber is brittle and susceptible to breaking. With the combined properties of both materials, they translate your pedal power into speed.

Lightweight size is a feature some mountain bikers will pay a premium for. Bikes made of lightweight carbon fiber frames enable riders to climb steep terrain a lot faster and more effortlessly. Other metal frames, such as steel, titanium, and aluminum do not compare to its lightness and makes for a world of difference. The sophisticated custom design and perfect geometry will even make them pricier than their mid-range counterparts.

A mountain bike wheel is a highly complex system, with each component being important in its own right. A good wheelset will strike a balance between performance and tolerance, with modern technology that controls these factors.

An upgraded wheelset can totally elevate your mountain biking game, but an experienced rider will notice this more than a casual rider. Some would even say that if there’s one thing you should splurge on, it should be on the wheels. Carbon wheels can set you back more than two thousand dollars. They are very stiff while maintaining the lightweight feature. That’s why they can make even the most mediocre bikes faster. I personally don’t ride carbon wheels, I wouldn’t have any cash left to spend on my other hobbies.

There’s a right tire for every type of terrain and trail. Tires contribute to how your bike handles. You need rubber with a good grip on the road for a fast track ride. That’s what a higher thread per inch will give you. High TPI will also mean less weight, which absorbs road stresses much better and lowers rolling resistance. And we know that lightweight equals to expensive when it comes to mountain bikes.

A 120-TPI tire will perform better when cornering as it conforms to the surface much better than say, a 60-TPI one. And costing at about $90 each, it offers high performance, faster rolling ability, but it is not as resistant to cuts as a lower TPI tire would be. Often, cyclists who want more tire mileage would then go for a lower TPI tire, which has less but thicker threads.

Mountain bike tires can be as expensive as you want but there’s a big difference between tubeless tires and regular tubes. While riding tubeless reduces the change on a flat tire, they’re also much more expensive. Still, if you rip a sidewall a tubeless tire will fail you.

Handlebars come in different materials and each has their pros and cons. Not everyone cares about handlebars because they don’t have moving parts. Moving parts generally suffer more wear and tear because of friction. If you really care, you may opt for carbon fiber material.

Titanium ones can be priced higher, but they are also heavier. As such, they can offer the comfiest ride when it comes to managing vibrations and impact.

Carbon fiber handlebars can provide a much kinder feel to the cyclist, with aluminum types being the harshest of them all. Moreover, carbon bars offer a longer lifespan compared to the other two types. They are lighter by as much as 40 percent and more costly at the same time. You’ll wreck your wheels sooner though.

One way to shave off some weight on your mountain bike is by getting a carbon seat post. Carbon fiber will make the ride more comfortable because it’s good at absorbing vibrations. It may be a top choice and expensive at that, however, an aluminum seat post still has its own following because of its stronger build.

As a mountain biker, you heavily rely on your brakes for safety. While it may the least glamorous skill, braking can take some mastery in order to achieve better control over any kind of trail. You will find three types of brakes used on mountain bikes. You have the rim brakes, coaster brakes, and disc brakes.

Rim brakes such as V-brakes, cantilever brakes, and caliper brakes are not so much favored anymore because they don’t have enough braking power during wet conditions. Coaster brakes, on the other hand, were used on first-gen mountain bikes, and are making quite a comeback for some bike releases.

Disc brakes have been around long before it was adopted in the cycling world. And since then, the hydraulic disc brake has been the most preferred brake by almost all cyclists. These brakes have transformed mountain bikes with their superior braking capability. You can go a lot faster and at the same time, these hydraulic disc brakes will enable you to stop harder as well.

Hydraulic brakes operate on the multiplication principle of transmitting forces from one point to another through hydraulic fluid. This happens when a piston driving the fluid is much smaller compared to the one that works on the brake pads. As such, force is increased exponentially, enabling you to stop efficiently.

A hydraulic brake adjusts to any condition such that even when the road is all wet and slippery, you will be able to stop safely. That’s why hydraulic brakes, especially with integrated shifters on certain bikes, cost more. They give you better control and require little maintenance compared to cable brakes.

A bike’s drivetrain involves a good amount of technology when you’re considering premium quality. It has the bits and pieces that propel your bike to move at different speeds. These include components such as pedals, cranks, chainrings, cassette, and derailleurs.

When you transition from one gear to the other, it has to be seamless. Any lag in between can cost you precious milliseconds that can result in losing a competition. Even with leisure biking, it can lead to an accidental crash or rough corner if it has poor quality.

When it comes to the drivetrain, the more you spend money on it, the more efficient and durable it is. And as always, being lightweight is a major characteristic of any MTB.

A cassette refers to the cogs that are connected to the rear wheel. These cogs will indicate the number of gears there are on the rear, which ranges from eight to twelve. To make them lightweight, cogs are built with titanium, which ups its sticker price.

Derailleurs guide the chain between cogs by being pulled by a cable in one direction and uses the spring tension to go the opposite. The more advanced technology has added electronic shifting, which prevents mud and water from affecting the shifting mechanism.

As many MTB’rs put it, the suspension defines a mountain bike. The fork or shocks are located in front, and has many brands and options once they can choose from. Essentially, you need to know the type of MTB frame your bike is compatible with, the front wheel size and axle as well.

Premium mountain bikes have adjustable fork settings that improve the ride quality and offer more stability. It is not surprising that you can shell out more than 1000 dollars to have high tech suspension that’s also lightweight.

The most expensive mountain bikes

According to singletracks the BMC Fourstroke 01 XTR Di2 is the single most expensive mountain bike at a whopping $13,000! That’s a pretty nice used car I’d say. Fortunately, you can get a decent mountain bike for around 1,000 bucks and if you shop smart, buy a model from last year and save yourself a couple of hundred dollars.

We may conclude that buying an expensive mountain bike seems only suitable for the competitive mountain bikers, and not so much for the recreational biker. It’s not for the value, but for the technology, it has that can improve performance.

While a 500 dollar MTB is not cheap by any standard, it is definitely incomparable to a 5000-dollar MTB. That said, though, any biker would always like to do their activity safely and enjoyable, and more often than not, you will really have to put in some good money for it. Consider buying a used mountain bike, MTB’s lose a lot of value in the first year and you. often can get a very decent bike for half the price.