The Netherlands is a small country with impressive cycling infrastructure. There are more bikes than inhabitants and many Dutch people own more than just one bike.

Dutch E-bike sales have been on the rise in recent years so it’s not surprising to see that E-bikes are really taking off. As of 2018, 40 percent of total new bike sales in The Netherlands are E-bikes.

Looking at the Statistics

In 2018, 1,01 million bikes were sold with a total value of  1,22 billion Euros. About 823 Euros million of that was from e-bike sales. Keep in mind that there are about 17.5 million people living in The Netherlands making the numbers even more impressive. 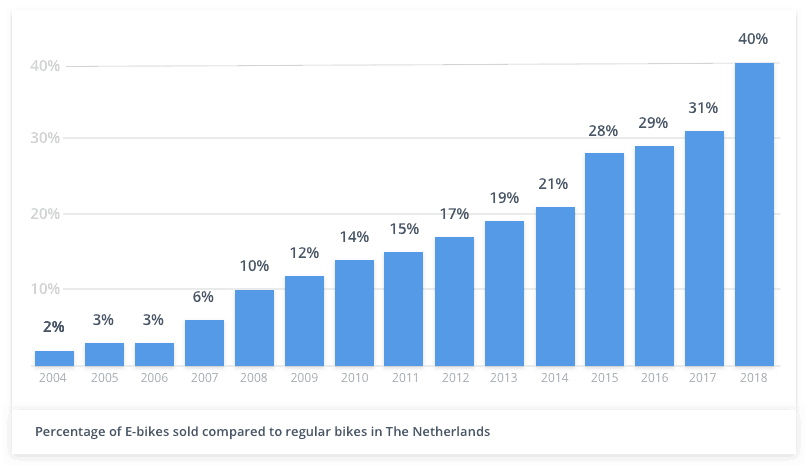 The most common bike you see in the Netherlands are regular bikes (also referred to as city bikes), at least until last year. E-bikes sales surpassed regular bikes by 6% according to the Bovag.

The Bovag is the  Dutch trade association founded in 1930 covering everything that has to do with mobility in the Netherlands with over 9,000 member companies.

At this pace, electric bikes might make for the majority of new bikes sold in The Netherlands in the coming years.

Why Are E-Bikes so Popular in the Netherlands?

The Netherlands has the best infrastructure in the world for cyclists (about 35,000 KM of bike lanes) and most kids learn to ride a bike at a very young age, some even as young as 3-years-old. The Dutch cycle about 15 billion kilometers each year and in 2017 18% of all transport took place on a bike.

It’s not surprising e-bikes are hitting it off. The Dutch economy is booming, the summers are increasingly warm and people are very interested in getting an e-bike in general. You see them everywhere and you wonder why you’re still riding a regular bike, it’s contagious and more gets more affordable every year. If it’s still too expensive for your taste, consider an electric skateboard, here’s a list of the best electric skateboards currently available.

It’s a small country and traveling by bike is often more efficient and the roads are designed with cyclists in mind. Cities like Amsterdam are banning cars from the city center or heavily discourage the use of vehicles that have a negative impact on the environment.

Looking at the statistics people seem eager to get an e-bike and don’t mind to spend a good amount of money on them. At this pace, e-bikes will replace the current regular bike fleet within a couple of years.

E-bikes aren’t tied to specific demographics and they come in all sorts of sizes and shapes. Mountain bikes (like Trek and Giant), road bikes, hybrids, kids bikes, and even cargo bikes to transport kids and drop them off at school.