You probably already suffer from a headache looking for all the differences between mountain bike brands. If you need to decide between a Giant mountain bike or a Trek you obviously wonder which is better. I had the same question so I decided to find out.

Giant vs Trek mountain bikes which is better? In general, if you look at Giant and Trek MTB’s in the same price range, Giant is better. Giant has slightly better components than Trek because they are the largest manufacturer and can buy components cheaper.

But let’s be honest here, it completely depends on the bike and the price level. You can’t compare a $1500 giant mountain bike to an $800 Trek bike. Both brands offer great mountain bikes, let’s see what makes these two brands different.

The Differences Between Giant Mountain Bikes and Trek

Both are major mountain bike brands and leaders in the industry, for the right price you get an awesome bike. Some Trek frames are in fact from Giant! Both make great bikes and crappy bikes depending on the price range, anything over $800 is often far superior to a $600-$700 bike.

If you’re a very fast rider or rather heavy don’t get a Giant. Giant’s MTB  suspension have long and flexible lower link which is less comfortable at high speeds and heavy riders might consider it a bit too flexible. Your weight might compress the suspension too much wasting energy and performance.

Only just a couple of years ago Trek had better geometry and suspension design but nowadays there’s hardly any noticeable difference. The most important part is the frame, both offer great frames but with a few small differences. Most of the components come from Shimano or SRAM. 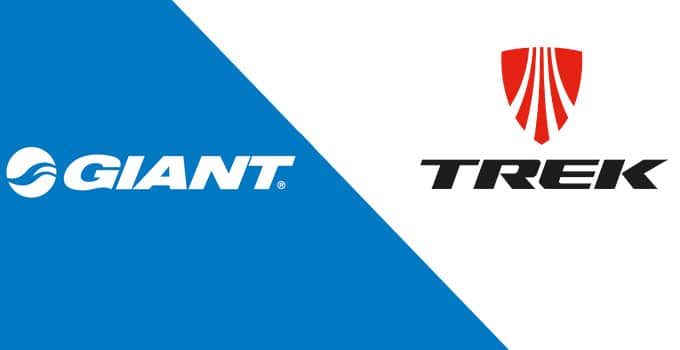 Giant offers the best bang for your buck, they recently even cut prices where Trek did the opposite. From a value proposition, Trek is less attractive, with the recent difference in prices, this is where Giant stands out. Unless you’re able to get a discount on a Trek,  budget-wise Giant is the better choice.

Giant is the largest manufacturer in the world and makes bikes for every brand, their frames are top quality and even Trek sometimes has Giant frames (check the photos from the Giant bike factory in Taiwan). Other people report that they find Giant’s frames not stiff enough, but it depends on what you like best and it’s less relevant when it comes to mountain biking. If you’re not the racing type or break bikes occasionally, get a Giant.

Others find Giant’s frame angles less progressive compared to Trek. When it comes to hydraforming (a process using fluid and high pressure to shape the tube), Trek is doing trickier stuff to gain strength and stiffness. Most of the time Trek does a better job optimizing frames when it comes to the strength-to-weight. In doubt and if you feel they are equal, check which of them offers the best warranty.

Both perform excellent depending on the bike and your personal preference or body type. Heavyweights and racers will often be better off with a Trek because of the differences in suspension. Trek is often considered like a plow bike and Giant is more playful, this also depends on how you set up your bike. The more you pay the better the performance and this goes for every reputable brand.

A $500 mountain bike performs a lot worse compared to a higher-end $1500 bike. You get what you pay for and sometimes saving a little bit more is really worth it if you’re looking at a lower range bike. I’d stay away from the cheaper models if you can unless you only plan to use it on roads and pavements.

Here’s a big difference, you often get better quality components when you buy a Giant MTB considering you’re comparing bikes at the same price range. Like mentioned before, Giant can get their parts cheaper because they own many of the factories and buy in bulk. The components often don’t have anything to do with the brands, they buy them from other manufacturers but the price makes a difference.

Both make great designs and this is really a personal preference. It’s all in the eye of the beholder but often people like Trek designs better. This also might have to do with the brand’s status. Giant is less shiny/flashy, like the Toyota of mountain bikes. They’re reliable, more affordable but not the sexiest.

Giant’s focus is on the quality of the parts and Trek is more into research and development trying to innovate and make better bikes. Suspension layout, for example, is a bit different on Trek bikes.

Trek has a better reputation as they won more contests. Trek won the Tour De France 6 times placing them in the elite class. Though the Tour doesn’t have much to do with buying a mountain bike, their reputation makes them more appealing to many riders.

Both companies have been manufacturing mountain bikes for a long time. Giant was founded in 1972, Trek somewhere around 1976. Both have a great reputation and a lot of experience in designing, manufacturing and developing new technologies.

Warranty often is limited to defects in material and workmanship. Crashing or damaging your bike in some way often isn’t covered, make sure to read the policies carefully.

Giant offers a lifetime warranty of frames except for downhill models (3 years). 10 years warranty for rigid forms and a one-year warranty for paint finish and decals. Other original parts (the non-Giant branded parts) are covered by the original manufacturer.

Both brands have their own versions of suspension technology, neither is really better than the other. Giant uses the Maestro System and uses their exclusive ABP, Re:Aktiv and Monolink systems. The suspension tech is about isolating the pedal and drive motion from the suspension. This means that when climbing, not much energy goes into the suspension compression, making your climb more efficient.

So Which One Should You Go For?

That depends entirely on your budget and your personal preference. As you can see it’s hard to pick a winner here. Both brands offer excellent bikes, but if you’re on a tight budget you should know by now which one you to pick. When it comes to design and aesthetics, Trek is often favored. I must admit that I like their designs a lot better, and I’m a sucker for shiny things.

Speaking about shiny things, what about Specialized VS Cannondale or Giant VS Specialized? Or maybe you’re more interested in how Trek compares to specialized?

Anyway, I owned both brands and agree that Giants tend to ride a bit more playful and Trek feels like a more stable ride. This depends on the bike so take my opinion with a grain of salt.

Ride them both, this is the only way to find out what you like more and which fits your riding style best. This way you can judge for yourself instead of relying on what others say. The most important thing is to get the best bike frame and parts within your budget.

Though Giant seems to offer affordable parts and bikes, prices also depend on where you live. Haggle a bit if you go for last year’s model, it will save you a lot of money and the markup for stores is pretty high.