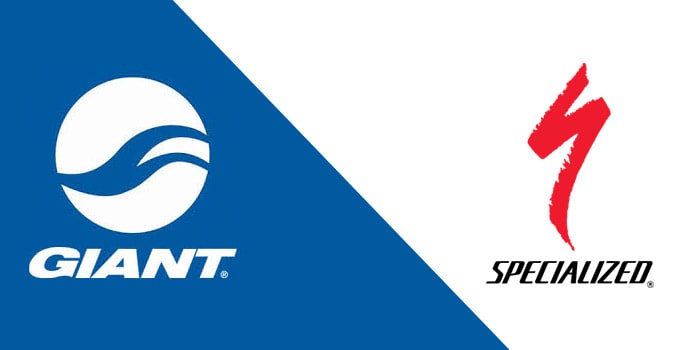 It’s hard to compare bike brands and even more so if you want to decide which one to go for. In this post, we are going to compare Giant to Specialized. Since I already researched this subject I might as well share my findings.

Giant gives you the most bang for the buck in the lower and mid-range. Specialized is more active in the high-end bike market. Go for a Giant if you want to spend between $800 and $2,000, go for a Specialized bike if you have $5,000 or more to spend.

That’s my conclusion but it’s a bit generic. There are many factors that make a bike stand out and suitable for you personally. An expensive Specialized bike can’t be compared to a cheap Giant bike and vice versa. So let’s look at the details like design, performance, price, and warranty.

Differences Between Giant and Specialized Bikes

I won’t say any of them are better than the other, that would be too easy and I’ll open a can of worms. Often both use the same components from suppliers in China and Taiwan. If you take one bike of each brand that is similar in price and purpose, there hardly are any differences.

The biggest difference is probably design and the fact that Giant produces frames themselves. Giant even makes frames for Specialized and is known to produce frames for other brands. They have a huge factory in Taiwan which allows them to sell their bikes a bit cheaper due to mass production.

Giant offers a wide range of bikes, a bit more than Specialized. Not just in the mid and top range, but also kids stuff and cheaper bikes which might dilute their brand image a bit for some people. They have a huge engineering team and since they also produce frames for other brands, this might give them a bit of an advantage when it comes to new tech.

Specialized is based in Morgan Hill, California and do all of their research and development themselves. After the design phase, the bike gets built by a manufacturer in Taiwan. There biggest manufactured is called Merida which offers great quality production standards. This doesn’t mean that Specialized just buys stuff and rebrand it as some suggest, that’s nonsense.

There are minor variations in dimensions, design and paint jobs and where the latter comes down to personal preference. As for warranty, they both offer a lifetime frame warranty, though the warranty can’t be transferred to a new owner. Specialized focusses on the high-end range and are less competitive in the mid and lower range bikes. Giant offers bikes in all ranges.

Specialized bikes are a bit more expensive in general but often offer higher quality components at the top range. Often Specialized bikes have a better resale value so keep this in mind when you make a decision. Giant offers many bikes in all ranges, their low end and mid-range bikes are often better than the competition.

There are differences in frames but only slightly. The most important thing is that the bike of your choice has the proper geometry that fits your body. There’s only one way to find out, try for yourselves.

Both brands design their own frames where Giant produces the frames themselves and Specialized has contracts with a couple of manufacturers.

Performance depends on the type of bike and how much you spend. Higher-end bikes are obviously better than budget bikes so there’s no way to compare them. Anything in the same price range often doesn’t really have a winner. Both are equal and differ in a few minor details.

You get slightly better components when you go for Giant in the low and mid-price range. Again this has to do with them building their own frames but also because of buying components in huge volumes from other manufacturers. Bike parts like brakes, derailleurs, shifters, and saddles aren’t made by Giant or Specialized. SRAM and Shimano, for example, are completely different companies.

You can’t ignore how a bike looks and while this doesn’t impact performance it’s important to many people. Color and design just add to the experience, it’s something that’s hard to deny.

In my opinion, Specialized offers more in this category. Their designs look better and have a way with paint jobs that Giant lacks. I’m sure there are people out there that completely disagree.

Giant is sometimes looked down on by some riders which is totally unjustified. This could be because they offer such a wide range of bikes that could dilute the brand. It’s probably best to ignore people who think less of them because it’s just silly snobbery.

Giant bikes are reliable and a solid choice and have been building bikes since 1972. Maybe they are perceived as a lesser brand because they are a Taiwanese company. Funny thing is that Taiwanese production standards are top-notch and they hold a high-quality standard. Did I mention Specialized also have their bikes built in Taiwan? It’s just a silly argument, to be honest.

I personally own an aged Giant mountain bike and I still enjoy riding it. If feels playful even after all these years. They come out on top in group tests and reviews and for good reasons, here’s what’s great about Giant bikes.

Specialized has a more exclusive reputation even though they outsource production. Maybe it’s in the name or the fact they have a smaller range of bikes to choose from compared to Giant. The brand offers great quality bikes and owns a lot of patents on its technologies.

Their high-end bikes are very exclusive and you get a lot of bike for your money at the top end range. If you’re looking for a $1,000 bike you won’t get anything special but if you’re willing to splurge 5k you get something amazing. Specialized is more for the demanding cyclist that loves high-end bikes.

The cheaper range is less attractive and probably has to do with the competition. There are so many brands competing in this range but the differences in bike quality are very small.

Some think that Specialized uses gimmicks that are nice but don’t add any real value. Examples like the brain inertial valve sorzertz and vibration dampers are often mentioned. On the other hand, innovating is never a bad thing.

Brand quality comes down to the lower end products offered. If a brand can offer a lot of quality at small margins you got a winner.

From what I learned there isn’t a clear winner between Specialized and Giant. Both are great brands and it comes down to personal preference and your budget. Both companies offer top-quality bikes and cheap bikes that are more suitable for commuting.

Giant has offers a huge variety of bikes in all segments where Specialized are more competitive in the high-end. A cheaper Specialized bike will have less to offer against similarly priced bikes of other reputable brands. If your budget is limited you shouldn’t go for a Specialized, you’re better off with a Giant as you get more bang for your buck.

If you have a lot of disposable income and want something in the $5,000 range you might want to consider Specialized.

These aren’t the only reputable brands out there. In my search for the perfect bike, I discovered a couple of interesting facts. Find out how Giant compares to Trek or how Trek compares to Specialized.